Less user effort, more business impact. This is the fundamental challenge a designer grapples with on a consistent basis. Over time, a designer’s senses get attuned to constantly scanning their environment for “Less is more” inspiration and exemplars.

One such exemplar I chanced upon a few years ago was the 6-word story. A 6-word story is a short narrative format on steroids. It’s the incredible art of compressing the beginning, middle, and end of a traditional storyline and delivering the entire emotional impact of longer stories with just 6 words.

A well-crafted 6-word story typically has a subject and verb that instantly gives the reader a sense of the core conflict. These bite-sized stories have always fascinated me because of their ability to deliver so much emotional impact with so little. I like to think of this amazing format as the literary world’s answer to McDonalds. Emotional fast food. 0% fat. 100% emotion. Here a few of my favorite 6-word story examples…

The most famous example of a six-word story is frequently credited to the celebrated American novelist Ernest Hemingway (1899-1961).

In six simple words, a heartbreaking narrative is told—from the few words but also from what is left out. The claim of Hemingway’s authorship of this 6-word story originates in an unsubstantiated anecdote about a bet his fellow writers made with him, challenging him to write the shortest story possible. He won the bet. His fellow writers paid up without a word. Whether Hemingway actually wrote this story or not is uncertain but what is more important to understand is why Hemingway was credited with this story in the first place.

Ernest Hemingway was well known for his minimalist writing style based on an approach which he called The Iceberg Principle or Theory of Omission. The core characteristic of this writing technique was focusing on surface elements without explicitly discussing underlying themes. The largest percentage of an iceberg is underwater and is subsequently the strongest part of the iceberg. In the same way, the strongest part of a Hemingway story is what is hidden from the reader. Hemingway believed that parts of the story should be left unsaid to allow the reader’s mind to fill in the blanks and let the deeper meaning shine through implicitly. 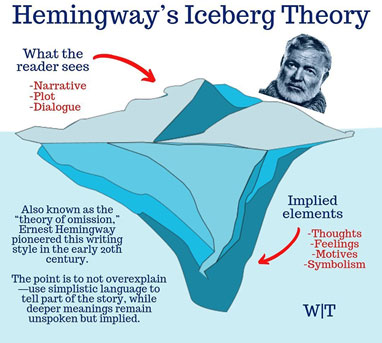 Hemingway developed the style as a result of being a journalist, a profession which requires conciseness due to space restraints in printed newspapers. Hemingway believed that the application of the iceberg theory created the perfect short story, and the more details the writer strips away, the more powerful the story is.

Ernest Hemingway’s Iceberg Principle was radical for its time and perhaps influenced the evolution of the Bauhaus philosophy of design which also focused on dematerializing conventional forms to their minimal existence.

If you are a UX designer, I highly recommend writing six-word stories regularly. Not only are these bite-sized narratives fast and fun, but they are also a fantastic tool for getting better at simplification, practicing design restraint, communicating in a more coherent, clear and powerful way & developing more persuasive UX strategies.

For starters, write your own story. Find inspiration in your own life and write a little memoir. Try thinking of a pivotal moment and boil it down to six words that carefully sum up your experience and convey your emotions.

A blank canvas. Painting it white.

Silencing the chaos, bit by bit.

I met me again. Didn’t Recognize her.

Tried it. Loved it. Stuck around.

Why can’t they just text me?