Art vs. Artist : The AI Perspective

AI, or Artificial Intelligence has been the technological buzzword for quite some time – popularized specially by 90s sci-fi movies like The Matix and Terminator. However, the world has generally seen AI as something quite elite – used in Mars rovers and extreme medical treatments till quite recently. The 2020s suddenly brought AI to the consumer domain – ranging from self-driven cars, AI chatbots to AI image generators that create beautiful digital illustrations. We will be focusing on this last case.

AI image generators can create a visual representation of literally anything. Most of them work in a similar way to Google – you need to type in a word or a few words of what you would like to see and then an image is created and given to you within a few seconds. The breakthroughs in AI machine-learning that led to the tools being possible are to 1) understand language and 2) have the ability to create images from data. The results that appear on social media timelines are beautiful, uncanny and arresting to say the very least. Currently there are quite a few AI tools available to be used – most prominent among them being Dall-e, Craiyon and Midjourney.

Creative process of AI vs Artist

One thing that got me very curious was – how did AI suddenly start creating art (art being loosely used here for visually striking, impressive digital images)? I always thought that creativity was the bastion of the human brain. But wait, were we training AI these times when we selected images of bikes trying to prove we are not robots? The images created by these tools although sort of broke that preconception – below are a few sample images. 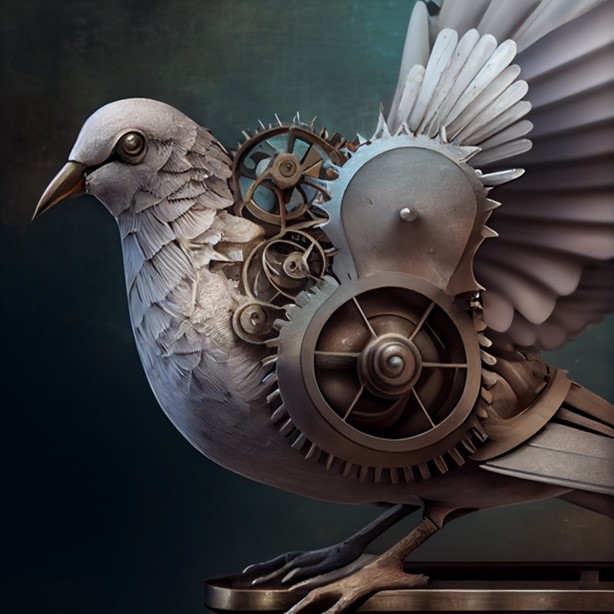 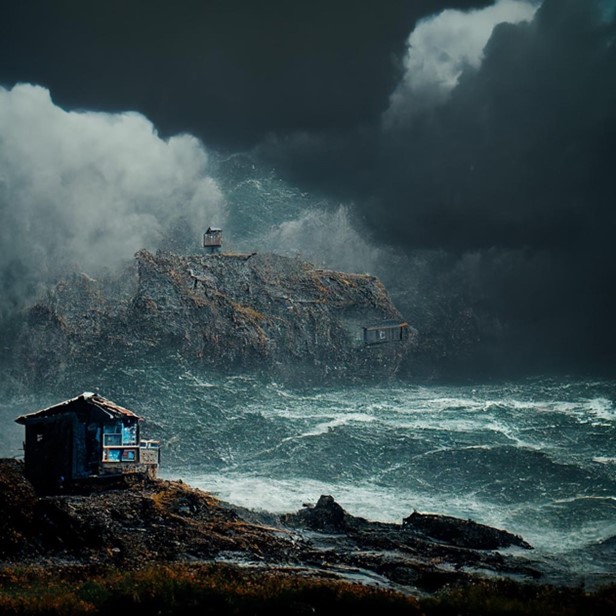 So how does AI create such visually stunning pieces?

Here is the basic process, simplified:

And all the above processes (excluding the first) involve machine learning – where the AI has been fed humongous amounts of data through the internet. And all the data processing happens offsite – hence there is no requirement of expensive hardware.

If we boil it down, it seems pretty similar to any basic creative process, does it not?

Well, machine learning and neural networks used in AI are a biomimicry of the human brain and learning process, simplified to the point that it can be computed. Hence the “creative process” of an AI image generator may also seem like a derivate of the human psyche.

How do artists feel about AI generated art?

There has been quite a dialogue in the creative community in the last few months as we saw the rapid rise of AI generated “art” and its users. And reiterating again, the results are getting better and better – AI generated imagery has suddenly become realistic, even artistic to an extent. Not only that, there is a unique surreal quality to AI “art” which is difficult to describe. 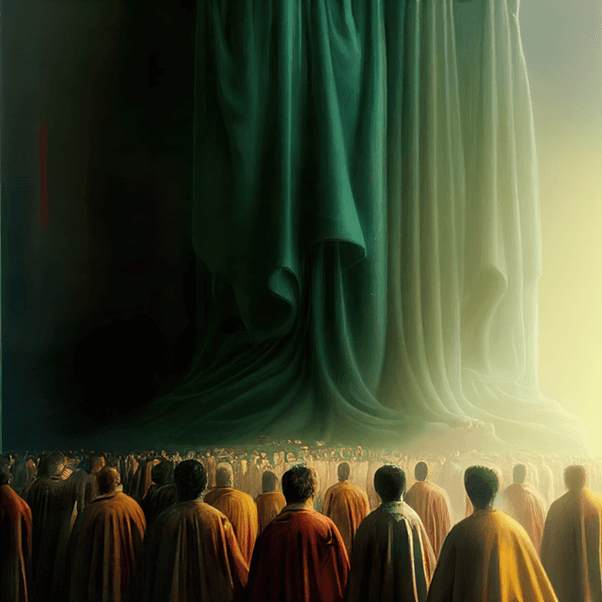 Also, the rise in creativity and general interest towards AI imagery, quite similar to the hype generated around NFTs, has led to the rise of a new breed of “Prompt engineers”, people who are experimenting and utilizing AI for some fun things. There is also the aspect of copyrighting, and that is a complete grey area as of now. The questions are manifold here – who would own the image generated? What would be the form of that IP? The funniest is, the AI tools would generate a different unique image even if the same exact prompt is input more than once. Currently, US laws say that AI generated imagery is non-copyrightable, which seems to be the right way to go to me. 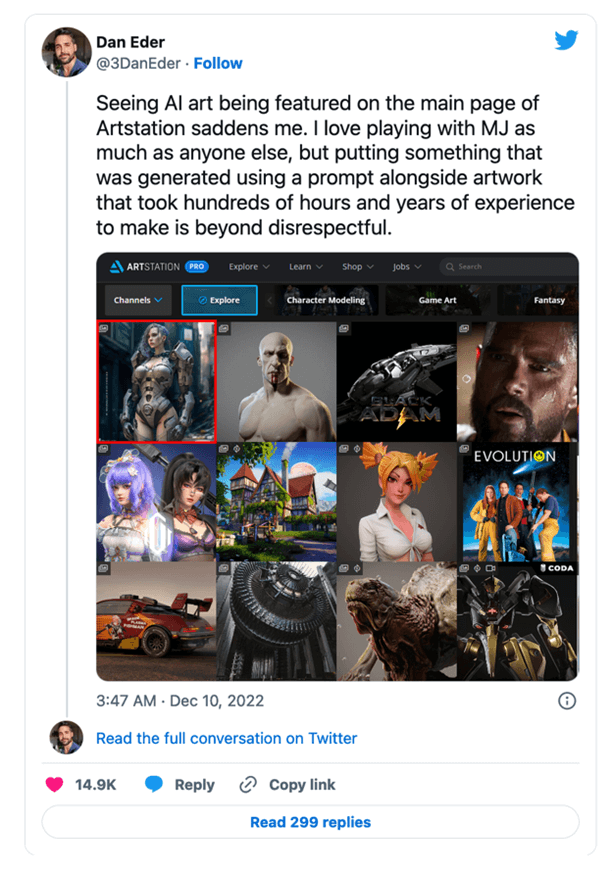 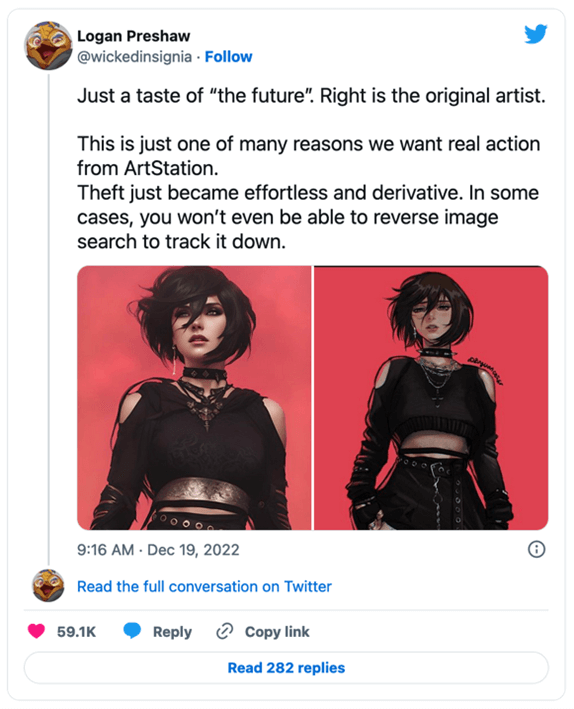 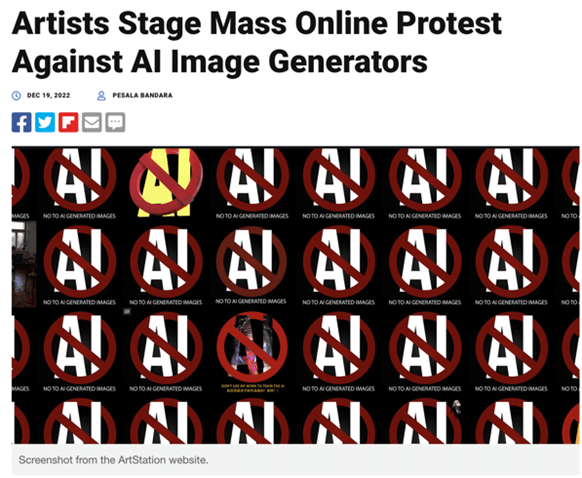 AI is new technology. And even though the copyrighting issue may not seem like a huge roadblock now, there are deeper, more complex problems with AI art generators swimming in the deep waters.

One big problem is the bias inherently built into AI thanks to imagery found on the internet. Not to delve too deep, but AI tends to demonstrate sexist and cultural biases. Easy example – a prompt for a doctor will show a Caucasian male in most cases. This happens due to the bias in the source itself – human beings. The internet has been a tool of the moderately well off, until it became accessible in the last decade. Hence the databases these AI tools are based off have data biases. The creators of these tools must build in strict checks to avoid these biases. 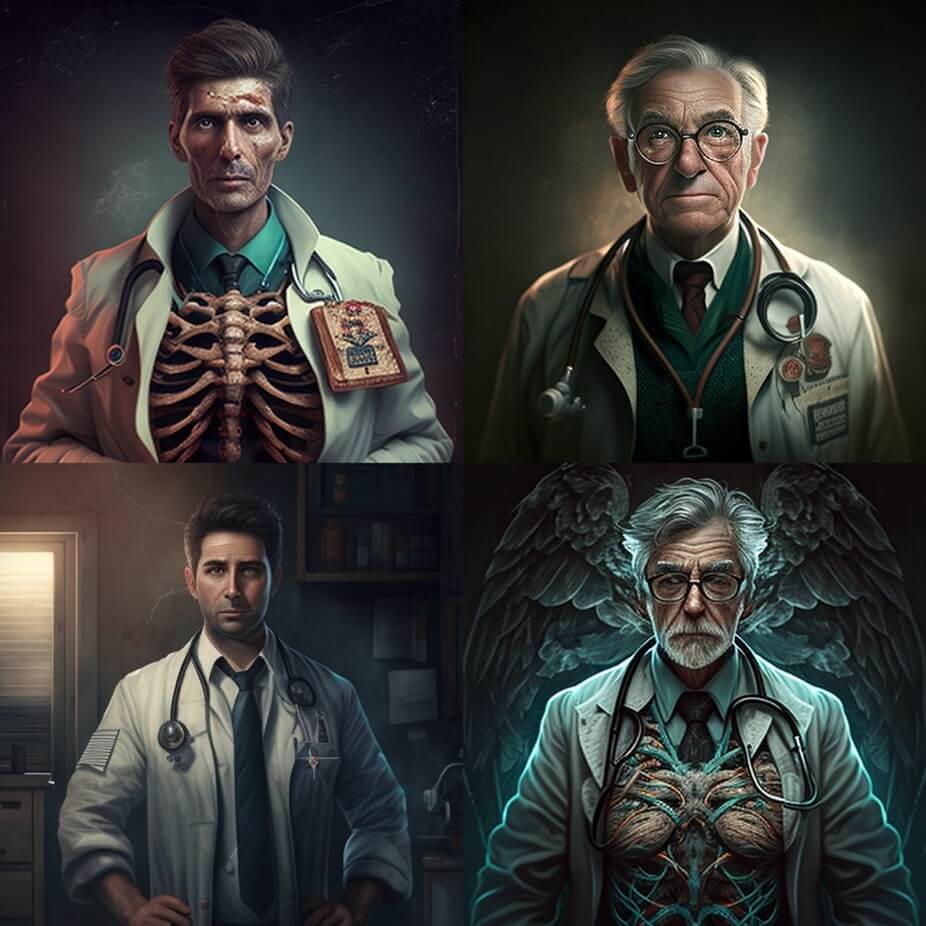 Image repositories like ArtStation, Shutterstock, Getty and Adobe are constantly updating their terms, trying to find a balance between business and ethics.
It will be interesting to watch whether AI actually overcomes these issues and becomes a well-oiled tool, or does it succumb and spiral into obscurity.

Will AI ever replace a human artist?

“You can look at historical uses of AI to see how we can retain the human touch. You may be familiar with Adobe’s Magic Wand, which was introduced into various tools like the Creative Suite. It helps you quickly select and remove objects from photos. However, professional photographers still need to draw on their human expertise to choose the right settings and to understand the context of the photo to make sure the AI tool is used in the most effective way. Similarly, I believe AI can be used as a tool to help us create art, but human expertise and understanding will still be required to achieve the best results….” – Zohaib Ahmed (CEO of Resemble AI, a voice generator and cloning service which he co-founded in 2019)

With the increase in quality of AI work, there is also the question of AI replacing human artists and leading to loss of jobs. There can be both sides to this argument – AI can speed up and augment an artistic process, can minimize time required for renders and produce varied concepts – but without an artistic human mind behind the wheels to steer it, it would be just another software collecting digital dust. Some industrious people will monetize it for sure, but AI image generators are a creative tool, and the reigns should remain with the creative community.

In 2022 AI has suddenly entered the public frontier. The uses are evident and manifold – we see self-driven cars, delivery drones, AI chatbots which can carry out deep conversations, voice modulators, video editors, and what not. Artists and creators in every field are buzzing with activity, trying out this new arsenal and refining the dinks. The tools are definitely at v1 – but evolving at a truly astounding pace. Understandably, there is some controversy around them.

For the debate of AI image creators, we should look at the example of Photoshop (and the doorway it opened for other image processing software that followed). When Photoshop revealed itself as an image editing platform in the 1990s-2000s, there was quite a lot of discord amongst the photography community about preserving the sanctity of the art and real images. But at the current times we see that photoshop has augmented the photography scene, and lent itself to various other uses as well. And puritans still remain – people who enjoy pure, unedited photographs remain free to do so. AI art generators should be following a similar trend. Art connoisseurs who prefer pure or human art will always seek out artists they prefer and patronize them.

Midjourney and Dall-e, on a positive note, may have made art, and design to some extent, accessible. Suddenly people who had no previous exposure to art, design or aesthetics may have a tool to experiment. For instance, some cybercafé owner in a remote town of Maharashtra may use Midjourney to create a beautiful logo for his business – that will not take away the job of a graphic designer or illustrator.

These AI tools are also great tools in the hands of the creative industry – they speed up many time-consuming processes like storyboarding or referencing. It easily has the potential to one-up google or Pinterest – imagine a search engine that gives you answers, instead of links! True – there are some biases, and since it is new technology – ai needs a strict guideline of ethics and usability, a set of rules directing its use, but it has great potential to open new vistas to the creative world. And that is truly exciting, both as someone who enjoys great content, to a small cog in the creative industry itself. 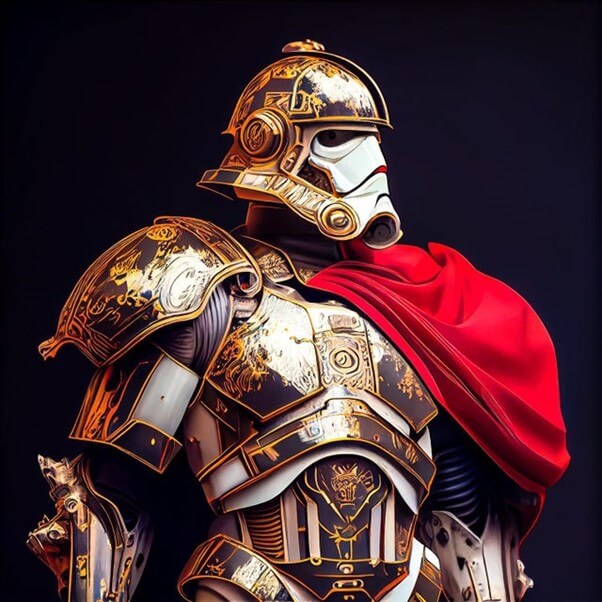 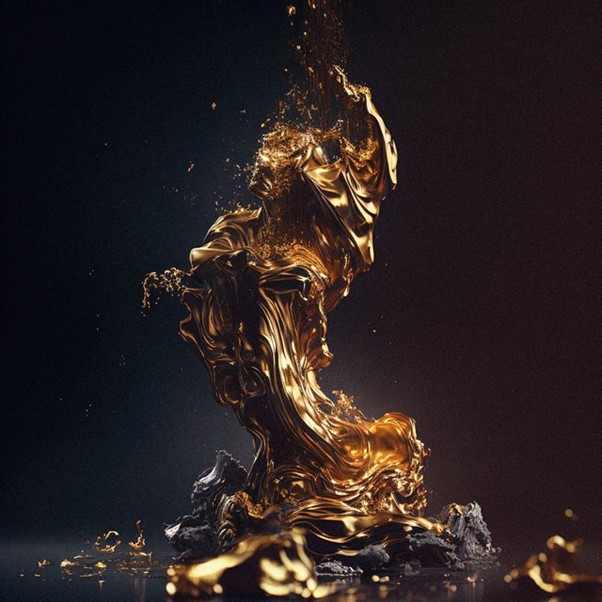 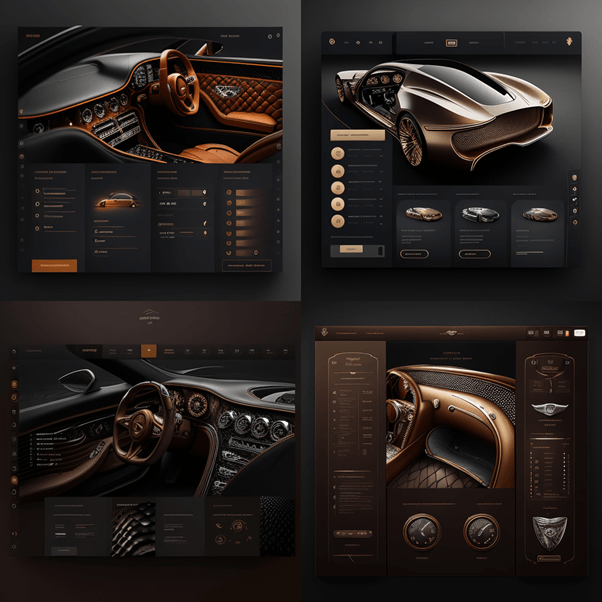 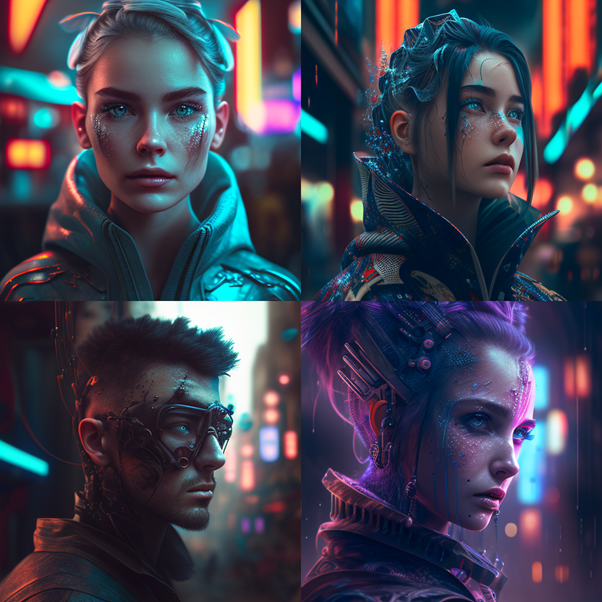