Bingewatch CultureNetflix, UX and the slow demise of moderation

Ask your mother and her mother, and no doubt they have a quaint story about how life was 30 odd years ago. Fond memories of the first TV they bought, the Sunday Doordarshan episode – and the family huddled around to watch it together.

Fast forward 13 years and now, it’s not uncommon to meet your colleagues on a Monday and discuss what they watched over the weekend – but this time it could be one of 36,049,046 shows that exist on various streaming platforms, and anywhere between 3 to 16 episodes apiece.

Right now, we battle the mutant that is Netflix today.

But back in 2013, Baby Netflix in its diapers was thinking about coming out with its first show. A show about an aspiring President, ruthless and cunning – aiming for the top.

This was a bold move by an online video rental company, so they needed to cover their bases. They asked Harris Interactive and cultural anthropologist Grant McCracken to find out more.

Harris Interactive and Grant McCracken did their research, they spoke to the people, they crunched the numbers, and a few days later, they came back, excited, and told baby Netflix the following:

“The focus on short narrative forms on social media and daily interactions has left a niche craving for longer narratives which people want to enjoy alone or with their partner/friends.”

Baby Netflix goo-ed and gaa-ed and gasped. And House of Cards was born.

And House of Cards was placed at the bottom of another, larger house of cards.

A house whose every alternate card was a wide-eyed, stone-faced watcher with a bottomless tub of popcorn in one hand, and a muscle relaxant in the other.

And every other alternate, a garbage truck of 100$ bills, halted at a tilt, pouring incessantly into the mouths of hungry director-types – eyes facing upward, aviators painted gold.

Now, we don’t necessarily think of ourselves as magicians, but there is a lot of under-the-table UX work that goes into influencing our day-to-day behavior. Watching shows is no exception to it. 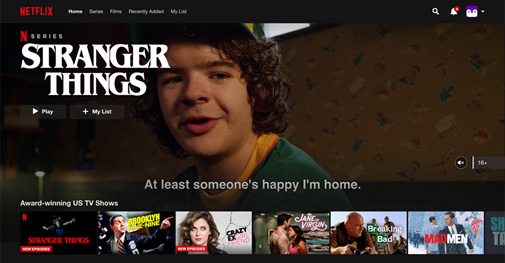 As much as we’d like to give all the credit to the UX designers out there, they actually get by with a little help from your own brain.

All’s not rosy in bingeland for the watchers, either. Apart from the obvious effects on the eyes, posture and muscles, there are effects on an array of life-related behaviors.

As it stands today, consumption of content is at an all-time high, and it’s on its way upwards.

Should we applaud this as a testament to the quality of content available and the creative bravado being encouraged today?

Or should we mourn the loss of that Sunday Doordarshan session, in a sepia photograph with frayed edges, a testament to moderation in the days gone past.

This way or that, a wave is coming. And it’s taking us with it.