What is Design Colonialism?

Modern design is dominated by western thought, ideologies and references. As a result, design in eastern cultures (especially those that were former colonies) such as India have ended up with a design identity crises of sorts. Our default design approach for India usually is to just blindly copy western design references and nonchalantly plonk them into the Indian context. As a result, design in India is often stuck in the messy middle between referencing western design exemplars and catering to India’s unqiue socio-cultural context.

Digital and real-world examples like these have become so ubiquitous to the Indian environment that we have just accepted them as the default design standard without questioning their efficacy or deeper impact.

Why does design in India need to be decolonized?

The India Design Report, published in 1958 by the government of India recognized that there is a need to create an alert and impatient national design conscience. A conscience concerned with the unique quality and values of the Indian environment and based on a questioning approach and a smell for appropriateness. It has been almost 60 years since then and we still don’t have a playbook for how to design for India, its vast population, infinite diversity and unique set of challenges.

By now we should have had a vast repository of post-independence era design exemplars demonstrating how a uniquely Indian approach can be used to align products, services & ecosystems to our conscience, culture & climate and be truly India-centric. But we don’t, except for a few notable exceptions such as the Amul dairy cooperative society, Laurie Baker’s sustainable housing for India’s poor, Anant Pai’s Amar Chitra Katha comic book series, Stein’s architecture for the India Habitat Centre in New Delhi, Nek Chand’s Rock Garden in Chandigarh, etc. 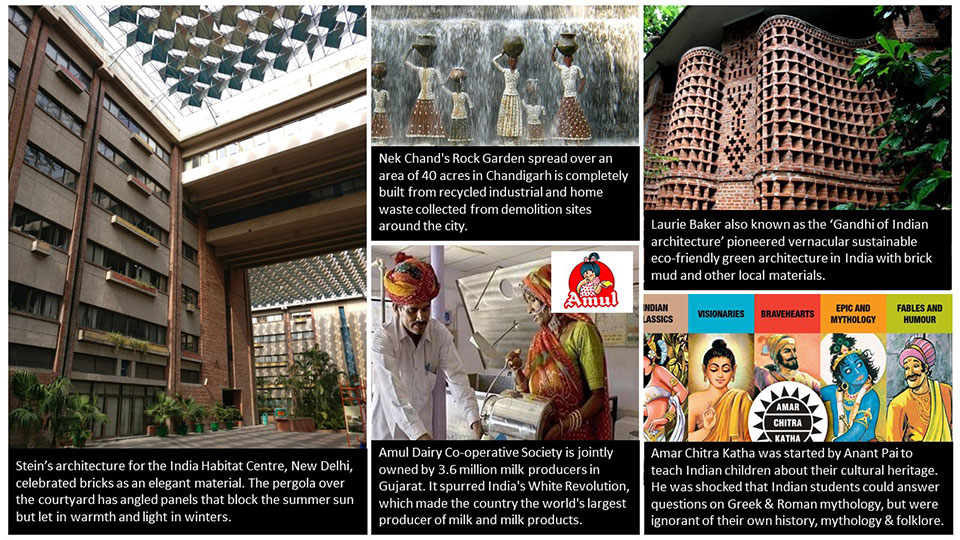 Is there a design framework that’s native to India?

It’s unfortunate that stunning examples of design from India’s 5000-year-old heritage have always been relegated to the ‘monuments & crafts’ category. This classification may have been useful from a library sciences point of view, but it has deprived generations of design students and practitioners in India and around the world from leveraging and learning from this incredible repository of design knowledge.

On the surface, the vast structural and aesthetic variations in design across India seem to indicate the lack of any kind of unified design philosophy or collective design belief system. But a deeper reflection into the underlying unity of India’s cultural past & present (across its people, monuments, crafts, art, sculpture, food, dance, music, mythology, scripts, trains, traffic, etc.) does provide some clues into what could possibly lead to an overarching design philosophy. 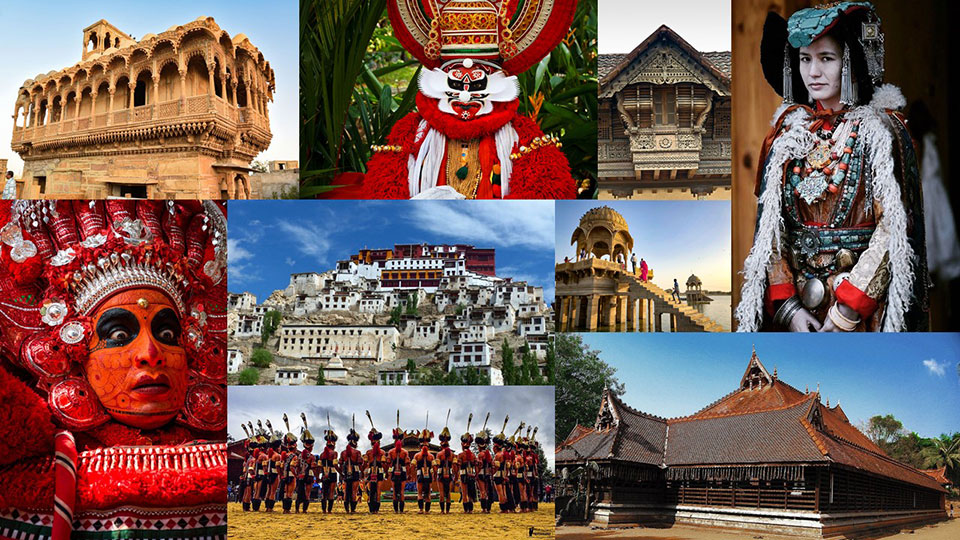 So, what is the Indian design ethos? How is it different from the western approach?

The way I see it, there are seven fundamental differences between the western and Indian design ethos: 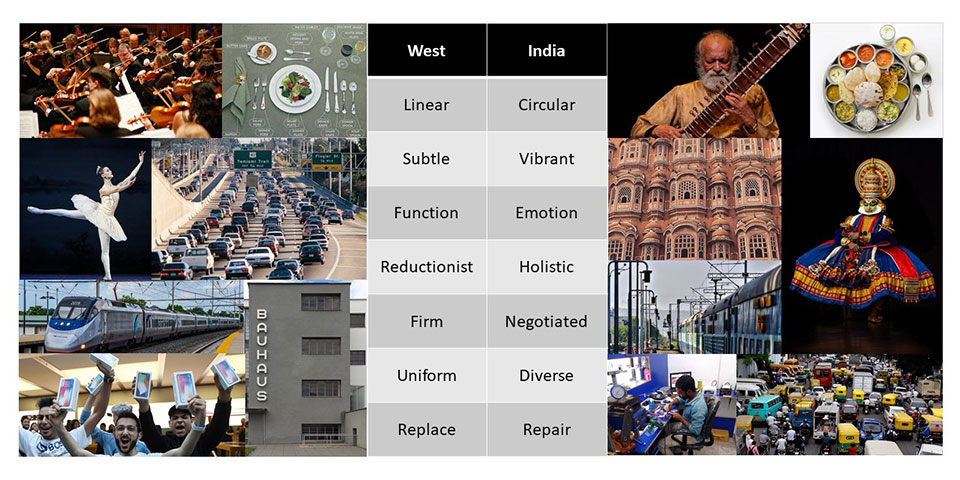 So, are you saying a western design approach is not suitable for India?

Decolonizing design is not about labelling one design approach as good and the other as bad. Its about adding another perspective to a designer’s toolkit. Having multiple perspectives in their arsenal allows designers to avoid a one size fits all approach and choose the approach that is best suited for a given context.

Western design philosophies like Bauhaus have contributed a great deal to elevating the discipline of design and improving the usability & desirability of the things we use in our daily lives. But sometimes the right solution also emerges from a confluence of two different approaches. Bauhaus was influenced by Japanese culture just as much as Japanese designers were inspired by Bauhaus. This intermingling and exchange of ideas benefited both schools of thought and ultimately enriched the discipline of design in both cultures.

At the end of the day, the only thing that matters is choosing an approach that delivers the desired outcome. So, decolonizing design is not about having a nationalistic bias or believing that your own cultural heritage is somehow superior to others. Its about understanding that the key to good design lies in appreciating and encouraging a diversity of perspectives.

How should designers leverage the understanding of these differences in their work?

The list of differences outlined in this article is by no means comprehensive. There could be several other dimensions of differentiation between western & Indian design philosophies and many similarities as well.

The important thing is to understand what impact these differences can have on the choices we make when designing for India. Would a minimalistic visual design approach appeal to an Indian audience that’s culturally oriented towards more vibrant use of colors? What kind of persuasion design principles would be most effective in a cyclical culture? What kind of information architecture models would make sense in a context, driven more by improvisation rather than precision?

On the surface, its easy to just dismiss India as ‘third world’ or ‘chaotic’ but a deeper inquiry can help designers develop a more subtle understanding of why India is the way it is and craft India-centric design solutions that are more finely tuned to Indian values, beliefs & aspirations.

The larger goal of decolonizing design is to discourage a ‘copy-paste’ design approach and develop a questioning attitude towards our default assumptions about ‘good’ design.