The world has come a long way since the year 1157 when the first bank, the ‘Bank of Venice’, was established in Venice, Italy to finance the monarch in his war. At the time, the bulk of banking activities fell into 2 main categories; safeguarding customer deposits of money and giving out loans at hefty interest rates. Today, ‘modern’ banks offer you a whole host of products and services that would make an 11th century banker’s head spin. 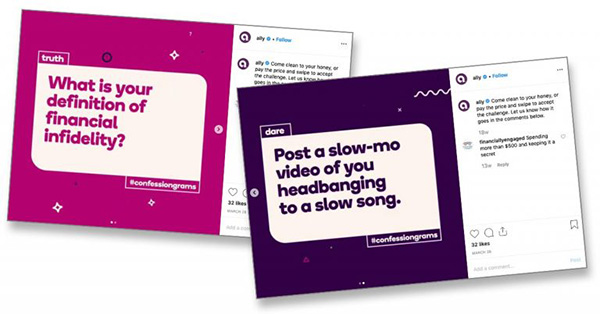 Ally bank uses #confessiongrams to humorously educate their customers about how to manage their money effectively.
If you can’t answer the question, you must complete an embarrassing dare.

Although some banks, like Ally, Revolut, DBS, are making a mark with products and services designed for the users of today, most banks continue to bank on the leverage they’ve gained through the ages or re-do what banks before them have done for decades, if not centuries. And honestly…why not?

Why mend what isn’t broken, right?

Banking clients will always tell us that the products and services they offer have a spectacular record of happy users. So many users in fact, that other banks often try to replicate their offerings. This is considered evidence of that fact that the product or service needn’t be changed (a.k.a. tampered with) in any way.

The truth is, users have no choice. There are only a few banks out there that really use the plethora of technological solutions available today to re-invent themselves and make themselves truly engaging.

Which means users end up using what’s available…traditional, run-of-the-mill banking, with some animations and transitions thrown in for good measure.

But what if we could bring banking into the 21st century?

What if banking could take, maybe not a leap, not even a jump, but just a light skip into the present day? Into the year 2020. The era of self-driving cars, robots that have taken over hard manual labour, and the internet of things (IOT) making our lives more comfortable than they have ever been.

What follow are a few steps to help us on our way towards the kind of experience that users deserve from banking already!

Every process exists for a reason. Sometimes that reason is a constraint. A constraint that may not exist anymore – time stresses, budget shortage, lack of technological advancement at the time. Each process has this history of limitations at its foundation. A robust, correctly designed foundation guarantees that the product or service that sits on top of it is superior.

A simple, yet effective, example is the use of terms and conditions on banking sites. For years nearly every online form I designed for a bank ended with a mandatory T&C checkbox, sometimes four.

In an effort to simplify the tedious forms we asked the question, “Do there really need to be so many T&Cs, and more importantly, do the users need to physically check each one?” Each time we’d get the same response. “Compliance needs it. This is non-negotiable.” Each time we pushed back.

The result; in 4 out of 5 forms we could do away with the multiple mandatory T&Cs (which remained as links for the customer to read if they liked).

Users tend to be high strung and stressed when it comes to the prospect of banking by themselves. And rightly so. This isn’t social media where you may add and then delete a post you should never have added, or accidentally like a photograph of a person you were secretly stalking. As serious as these matters are, the stakes are a bit higher when it comes to banking.

We all know that people under stress tend to make mistakes. Their ability to make sensible decisions is impaired. In such a state, a user attempting to complete an online monetary transaction needs to be treated with care and sensitivity. Rather than throwing a barrage of ads, jargon, clauses and processes at them, one must try and remove all impediments to their goal from their focus.

Let’s take the task of transferring money from one bank account to another in India. For the longest time online banking users have had to choose what’s known as a ‘payment railroad’ via which to transfer money. IMPS, NEFT, RTGS and UPI are the most popular railroads. Yet UPI isn’t presented alongside these other options. Users vacillate between the decision to UPI or conduct a Fund transfer, when both actually do the same thing. The only difference is in the details, in the amount and whether or not the payee (receiver) has UPI too.

With some clever designing, and armed with customer usage data, a client I recently worked with has done away with this choice entirely. They found an elegant solution that checks each transfer’s data, e.g. amount, receiver type (with or without UPI), time of transfer, etc. and automatically chooses the best railroad for the task. They also remove the other railroads from the user’s view, thus further simplifying the experience of money transfer, so regularly carried out by users.

A process that banks have been using for ages was found to be lacking, and some design and technical ingenuity later, we have what’s probably the best money transfer process an Indian bank can boast of.

Get creative with technology

We may not always have use for technology as jazzy as virtual reality or artificial intelligence, but with 51% Indians having access to the internet, the opportunity to reach customers online has never been riper.

Business banking: Banks could drastically cut down time spent and costs of on-boarding current account holders by conducting site verification and other KYC formalities through video calls. This could potentially bring the ETC (estimated time of completion) for customer onboarding from a minimum of 7 days, down to a matter of minutes.

Blockchain: The Blockchain technology provides higher levels of security to banks through the use of high levels of data encryption, which go a long way towards protecting banks from frauds perpetuated against themselves and their customers. Activities like KYC, Smart contracting, Payments could all be carried out over this distributed ledger technology, safely, efficiently, quickly and economically.

Contactless ATMs: Now more than ever we see the need to minimize physical human interaction with objects for public. Contactless ATMs will allow users to conduct ATM transactions through either an app on their phone or via biometric authentication systems like face and voice recognition.

A wise man once said, “A closed mouth catches no flies.”
In a nutshell, the technology is there, we must abuse it.