The Curious Case of Influencing Individuals through Media

A few minutes into The Great Hack, a scathing documentary on Netflix, the audience is introduced to Cambridge Analytica, a UK-based consulting firm. During the course of the show, viewers learn that user data was illicitly mined from Facebook to manipulate voter decisions during the U.S. presidential elections and the European Union referendum, all against the backdrop of the courtroom and ex-employees of the firm. A biographical drama based on (famously right-wing) Fox News’s CEO Roger Ailes’ life depicts how he plants conservative thought so deeply in the channel’s operations that it allegedly influenced the U.S. presidential election. His belief was to appeal to the conservatives, and broadcast what they want to see.

The common theme for both these shows released in 2019 was how media can be manipulated to influence the audience and possibly alter the socio-political fabric of an entire nation. And, of course, the daunting fact that these are both true stories.

A relatively new entrant, WhatsApp is another medium through which people’s political and social outlook are being heavily influenced. The mobile application is a treasure-trove of manipulated photos and videos that a certain section believes to be gospel truth, ignoring the glaring fact that these messages could possibly be user generated.

For anyone with an extensive marketing machinery or just an innate desire to manipulate others, each arm of traditional or social media can be used in a singular way, united only with the aim to influence. It takes a deep understanding of psychology, culture and the medium itself to be able to influence the masses. A few of us are mindful (and lucky) enough to draw our own conclusions post thorough research, independent of opinions of the media, family and friends – but how are the rest of us so easily persuaded to believe every news article, every news channel, every WhatsApp forward, every alleged exposé? How does the media manage to reach into the recesses of complete strangers’ brains and gradually affect their political and social outlook?

Birds of a feather, flock together

Back in 1984, Dr. Robert Cialdini introduced the principle of ‘liking’ and asserted that “we like people who are similar to us.” It’s safe to assume that ‘similar’ includes way beyond the banal liking for the same colour or cuisine. It’s about being similar intrinsically, in terms of our values and outlook towards the fundamentals. You will, then, as a liberal, consume media that appeals to your thought, as would your friends, who are, by the way, your friends for a reason. Quite naturally, every message that comes through your desired choice of media, be it traditional or social, will be your truth. In terms of the media influencing people, the principle of liking is basically half the battle won… and the media didn’t really have to lift a finger.

Traditional media relies heavily on a three-tiered system to influence public opinion: ‘agenda-setting’, ‘framing’ and ‘priming’. Agenda-setting selects a particular cause, political candidate or ideology as a focal point. Framing creates a perception of the focal point, spinning a tale in the desired direction using every storytelling tactic in the book. Both agenda-setting and framing require a sound understanding of the cultural context, so as to grab eyeballs, emotions and empathy. Now, it’s time to bring out the big guns…

A classic case of subliminal messaging, repetition, or ‘priming’ is a powerful (and rather annoying) psychological tool used to influence an audience.
So, how does this work? The brain creates an initial association or memory when introduced to an idea. With each reiteration, the cognitive load on the brain reduces, progressively amplifying the idea until it sinks into the subconscious mind of the audience, eventually leading to a new belief.
News channels employ repetition through videos and the graphic ticker, playing the same clip or displaying the same headline repeatedly to drill an idea into the audience’s mind. Before you know it, you’re starting to believe what you see, irrespective of it being morally wrong or difficult to grasp as a concept.
On social media, targeted advertising ensures that a user sees the same thing on their timeline frequently enough to be influenced into making a purchase, or at the very least, recalling the brand in the future.

The Ace of Spades

Obedience to authority is another persuasion principle presented by Dr. Cialdini that works like magic in the world of media. The slightest suggestion of a scientist or a doctor making a claim has the average person drinking animal urine to cure a deadly virus. Well, maybe not the average person… but you catch my drift. Be it a news report, a news channel, or WhatsApp, the stamp of an expert is unquestionable and extremely influential, whether it’s legitimate or not. This persuasion tactic works best for boomers, who usually don’t access multiple outlets to form a more informed opinion. 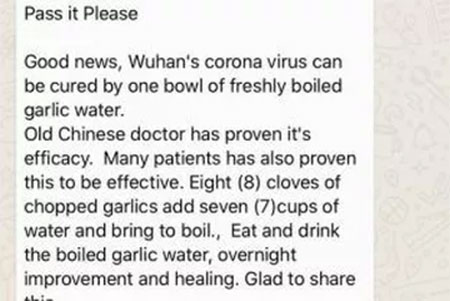 The evolution of social media brought about the advent of a number of dodgy forwards. A half of WhatsApp forwards today are nationalistic or religious in nature, while another half are rumours. When a person (especially boomers with their social media savvy and general naivety) receives a WhatsApp forward, their belief in the text relies on who sent it to them. A study by India Today confirms this – the section of users who forwarded a message did so based on the fact that the sender is someone who, in their opinion, would not forward fake news. Essentially, if their trust in the sender is unparalleled, they can be easily influenced by a WhatsApp forward that may or may not be factual. This influence builds up in scores as more and more people receive such messages and continue to forward them, believing it is their duty to do so.

In his book How to Win Friends & Influence People, Dale Carnegie wrote that people, at their base, just want to feel important. Maslow’s Hierarchy of Needs exhibits the same theory. Newspapers and broadcast channels might not be able to single out an audience member and make them feel special, but social media can by employing personalization to target users. A prime example is online petitions, which usually support a particular cause. Online petitions approach users by means of copy that makes the user feel needed, important. The copy reads something like “Hi Tanya, we really need you”, further detailing the cause, arousing empathy in the user while also making them believe that their contribution would truly be valuable. The cause is usually bent towards a certain ideology, and thus, at very minor level, can influence a person.

These are, in my opinion, just the tip of the iceberg in the myriad of ways that we are influenced every day. Influence is a powerful tool; it can cause an entire country to change its discourse. And all we really need to do is just be mindful of it and form our own individual opinions, lest we find ourselves as the ‘manipulated audience’ of a Netflix documentary years later.