To judge a book by its cover.Does a cover really matter?

You walk into a bookstore. It smells like new books and paper. You start walking around the isles and end up at your favourite genre. You start browsing, looking at the spines and covers of the books and start reading the titles. You pick up a book with an appealing cover and turn it around to read the summary. You don’t even need to be in a bookstore – it could be a train, and you can see the passenger sitting across from you reading a book. Your eyes zoom into the cover. The next thing you know, you look it up on your phone.

Ever wondered what you made you pick up that book at the store? Or why did you look it up on your phone on the train?

There are a multitude of factors that help you decide on a book to read. Your friend suggested a book, it’s been on the bestseller lists, it was trending on reels or maybe just because you were drawn to the cover of the book.

We all have heard the saying, “Don’t judge a book by its cover.” While that is true, readers tend to look at the cover before deciding if they want to know more which ultimately ends up with them buying the book.

Think of a book as a product and the cover being the packaging of the said product. The cover should catch the eye of the reader, while standing out in a bookstore with a million other books. You want the customer to choose your product, so first impressions matter. A customer usually decides if they want to purchase the product within 90 seconds of viewing it. That’s all you have to make an impression.

A book cover is a story of its own which allows the users to decide if they want to read more of that story or not. The cover gives readers a glimpse of the genre, storyline and tone of the book. This can be done using an image, illustration, different printing styles and paper.

Another important factor of a good book cover is the typography of the title. A cool way to do this is to turn the letters of the title into illustrations about the book. The typography also helps in setting the tone of the book. For example, a gothic font would make the reader think that the book is a periodic drama set in the UK while a feminine cursive font would tell the reader that the book is about a teen romance. Using the wrong font can cause confusion for the reader. 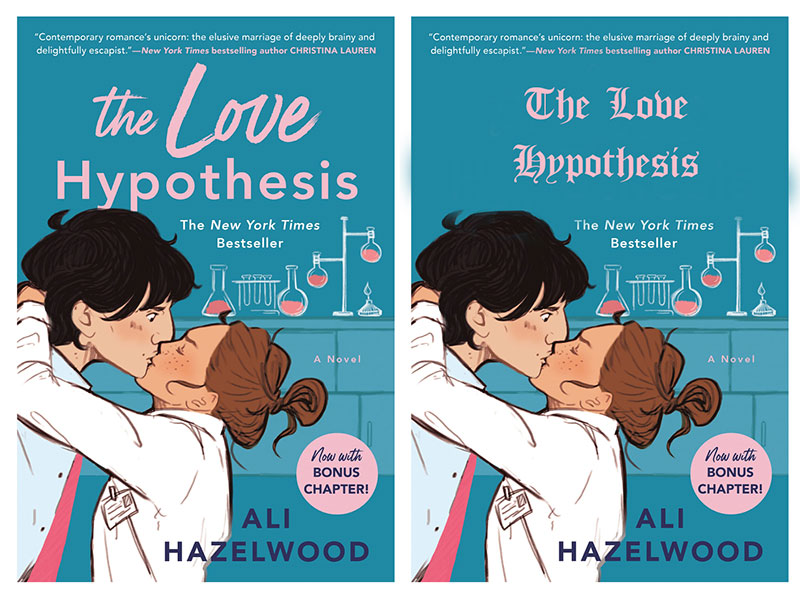 Do you see how font really makes a difference?

You don’t have to be a reader to know these.

The designers of these books knew what they were doing. These book covers are so iconic, you would recognize them even if you have not read the book (And also because two of these are movies!) Do note that the fact that these covers hold brilliant stories and that does contribute to these covers being remembered through history. I have rounded up some covers that truly have done a great job in capturing the essence of the story in their pages as well as readers all over the world.

Jaws is about the story of the three protagonists – A police chief, a marine biologist and a professional shark hunter trying to hunt a man-eating great white shark. It is considered to be an epic battle of man vs wild.

The initial proposed design for the cover was a typographic cover. Oscar Dystel from the publishing house said that an image was necessary on the book cover.

“Without an image, no one would know what Jaws meant. It could have been a book about dentistry.”
– Oscar Dystel

An artist, Paul Bacon was commissioned to make the illustration for the book cover. He made an illustration of an enormous head of a fish. The art director of this project, Gotfryd suggested that they add an illustration of a swimming human to add a sense of distress and sense of scale. This cover found its way to publication, becoming a smash hit.

The story starts with a girl being killed by a shark while she was swimming in the ocean. This acts as the catalyst for the protagonists to start a journey to capture this shark. This cover shows a woman swimming and a shark directly below her. This cover captures the pivotal first scene of the book. This cover looks simple enough but manages to explain the premise of the book. The font used for the title is a bold sans serif font. The ‘W’ is made of overlapping ‘Vs’. This is meant to be a nod to shark teeth. The colour palette of this book cover suggests that there is a sinister and scary theme running throughout the book. The words ‘A Novel’ are blood red in colour which adds contrast to the mainly black and white cover. It also represents the danger the swimmer has with the shark coming right for her.

The Catcher in the Rye

The Catcher in the Rye is a cult classic book. The story is narrated by the protagonist, Holden. It follows the story of a depressed 16 year old Holden who gives his opinion on everything that happens in his life. The novel deals with complex issues of depression, connection with others and innocence.

J.D Salinger, the author of The Catcher in the Rye was known for not having any illustrations on his book covers. He felt like they put an outside illustrator’s impressions on a reader. So, for this reason, the cover of this book was designed by one of his close friends, E. Michael Mitchell.

E. Michael’s design features a horse on the cover. This depicts the symbolic meaning of horses as lost innocence of Holden’s childhood throughout the book. The blood red colour scheme with the carousel horse suggests that ‘all childhood dies’.

This cover can be interpreted in multiple ways. For example, the cover can be a nod to the start of the book, where Holden talks about his school moulding boys and helping them ‘jump the fence’ into adulthood. It can also be a nod to the end of the book where Holden decides not join his sister on the carousel, accepting that his childhood has ended. There are also other multiple mentions of horses throughout the story like:

“I don’t even like old cars. I mean, they don’t even interest me at all. I’d rather have a goddam horse. A horse is at least human”
– Excerpt from The Catcher in the Rye by J.D Salinger

This cover is one of the most recognisable book covers even though the book has not been adapted into a movie.

This novel is about the story of the Corleone mafia family in New York. The mafia is headed by Vito and is passed down to his reluctant son, Micheal. The book goes into Michael heading the empire and the wars between the mafia families of New York.

This cover was designed by Neil Fujita, also known as the godfather of graphic design. He used avant garde painting and photography to design his book covers. For this book, he created the typeface for the book’s title.

He designed a heavy looking gothic font – bold yet simple and elegant. The font screams the general tone and genre of the book. By extending the letter G to the letter D he created ‘a house for God’. The type has thick letters with a masculine vibe, perfect for a book about mafia men. He intended the type to be used as the logo itself. The colour palette of the cover suggests that it is a dark themed book. There is an illustration of a puppet master pulling strings which merges with the title of the book. This is a reference to Vito’s thoughts that men in power are puppet masters. Vito wishes that his son, Michael would be the puppet master.

Vito tells Micheal, “I don’t apologise — that’s my life — but I thought that, when it was your time, that you would be the one to hold the strings. Senator Corleone, Governor Corleone, something. Well, it wasn’t enough time, Michael.”
– Excerpt from The Godfather by Mario Puzo

This font that has now come to be called the Godfather font has been adapted into the movie poster itself. It is instantly recognizable by readers as well as non-readers. The popularity of the film in pop culture also contributed to the success of this book cover.

These are three very different looking book covers, yet they have some similarities. Here are the principles to follow when designing a book cover.

All these book covers follow the Z structure. A human eye moves in a “Z” shape while reading something. These books follow the structure with their designs, with the reader reading all the content on the book cover properly. This also ensures the readers don’t miss the illustration, allowing them to get a glimpse of what the book is about. 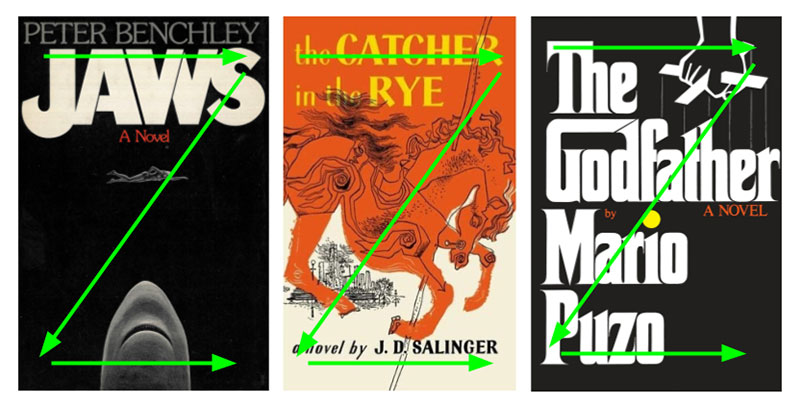 The typography of the book covers clearly depicts what the book might be about. The bold font used for Jaws has shark teeth merged into the word. The type used for Catcher in the Rye highlights the word catcher and rye explaining that these are important terms used in the book. The Godfather type is a masculine font that tells the reader the book might be about a high class man who is considered as the Godfather.

3. The book cover should capture the tone of the book 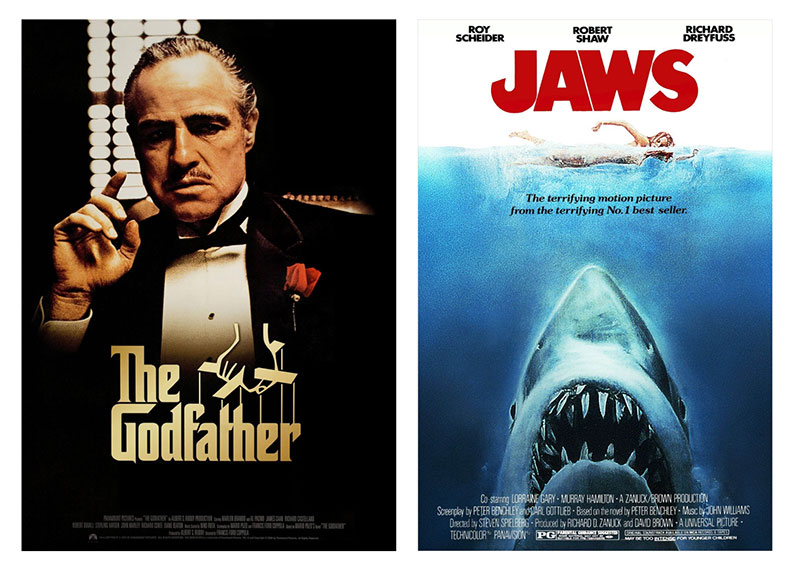 These particular designs are still remembered even though some of these books have had revamps of their book cover designs.

This being said, while we shouldn’t judge a book by its cover, it is still a metaphorical door to another world. It might help if the door looks like one you’d want to open.