UX Wrapped3 things you must stop doing in 2023

Have never really been a fan of the “New year UX trends” type of articles. So, when I was asked by our marketing folks to write an article listing UX design trends for 2023, I wasn’t delighted (to put it mildly). Had they failed to grasp that UX design is not about chasing fleeting trends? Did they lose sight of the fact that UX is about asking questions rather than using readymade answers; it’s about peeling away layer after layer of confusion until the problem is defined with 100% clarity before jumping to the UI?

I pushed back but eventually relented. I realized that my puritan UX perspective needs to be balanced with the reality that along with the user centric approach of ‘peeling away the layers’, people also need shortcuts, thumb rules or a glanceable list of dos & donts. I guess, people want the Maggi equivalent of UX: UX Maggi! Add requirements and trends into a pot of boiling water. Cook uncovered for 2 minutes. Serve and enjoy your instant UX utopia!

Instant noodles aside, ultimately, I am glad to be pushed out of my UX comfort zone. So, here’s my UX prescription for 2023…

(For those not in the know) Neumorphism is a visual design style for digital interfaces that pairs a monochromatic colour palette with subtle shadows that make the interface’s buttons appear more tactile. Neumorphism was exciting and looked beautiful (for a little while) and then it disappeared from interfaces as quickly as it came. 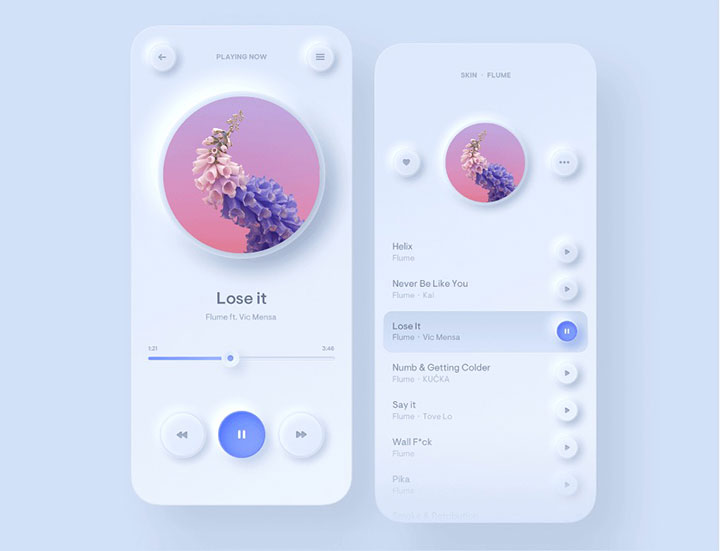 It also spawned other variants such as Glassmorphism, Claymorphism, etc. which had an even shorter life span on the interface design landscape. 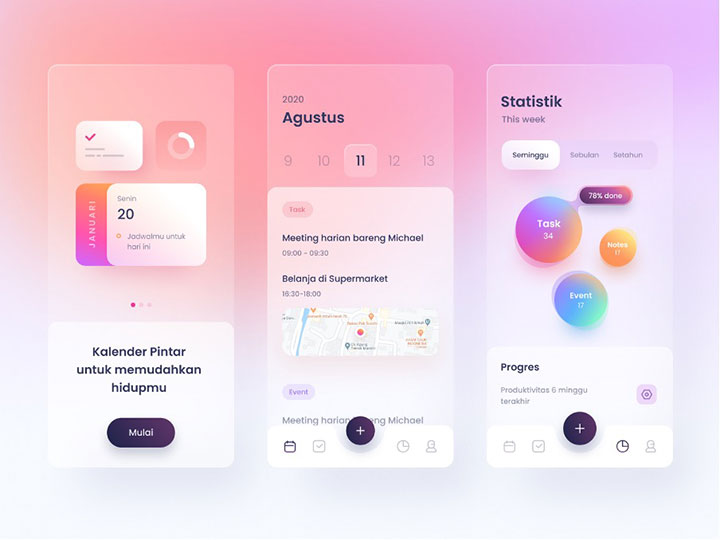 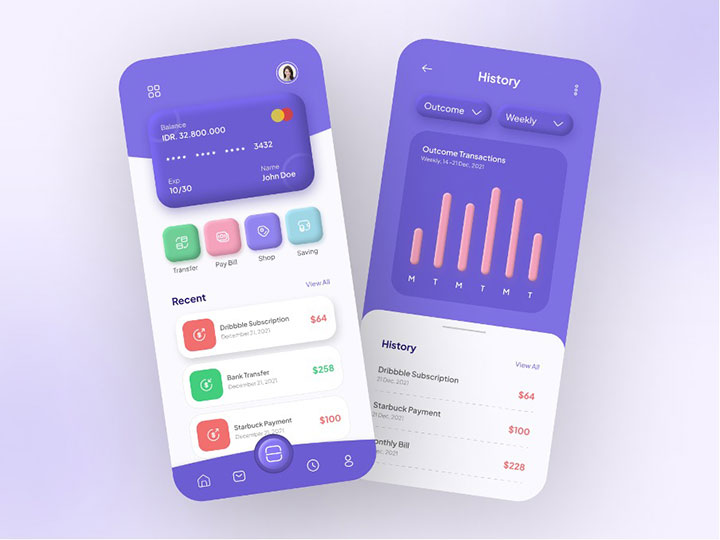 A trend is what’s hip or popular at a certain point in time. So by their very nature most trends tend to be relevant only for the short term. In rare cases, some trends tend to become timeless such as material design or semi-flat. This interface design approach seems to have stood the test of time. Why do some trends die a quick death and others go on to become timeless? It’s a complicated question but I think the answer probably lies in the balance between ‘Form’ & ‘Function’.

Interface design trends that tend to prioritize form over function tend to die out quickly. In other words, visual styles that rely heavily on ornamentation (such as very deep shadows, exaggerated highlights, etc.) usually do not stand the test of time. Neumorphism for instance quickly became impractical because Neumorphic styling requires interface elements to be the same colour as the background, distinguished only by shadows and highlights surrounding the element. This leads to contrast issues and ultimately compromises the entire experience. At the end of the day, Neumorphism might create the WOW! factor at a blink test level but quickly undermines satisfaction as users start interacting with the interface. Also a monochromatic colour palette creates limitations from a branding perspective.

Material design or semi-flat have become the mainstay for designers because they prioritize function over form. Their goal is to provide clear affordances and ensure that the interface looks simple and intuitive. Their visual styling approach essentially relies on minimal use of shadows/highlights and removal of unnecessary ornamentation. 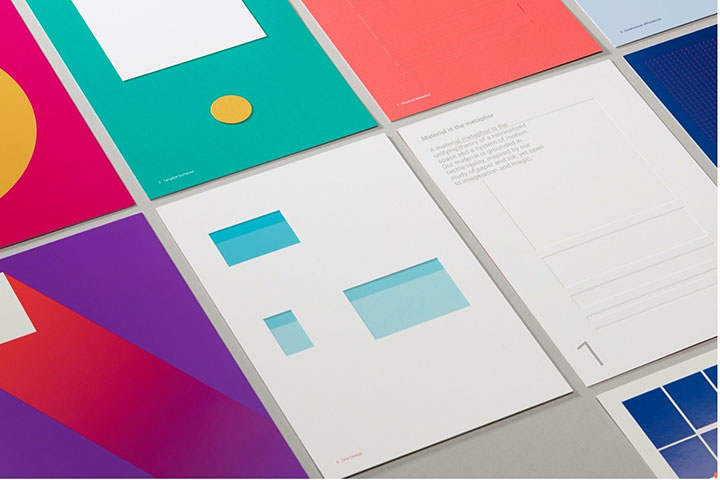 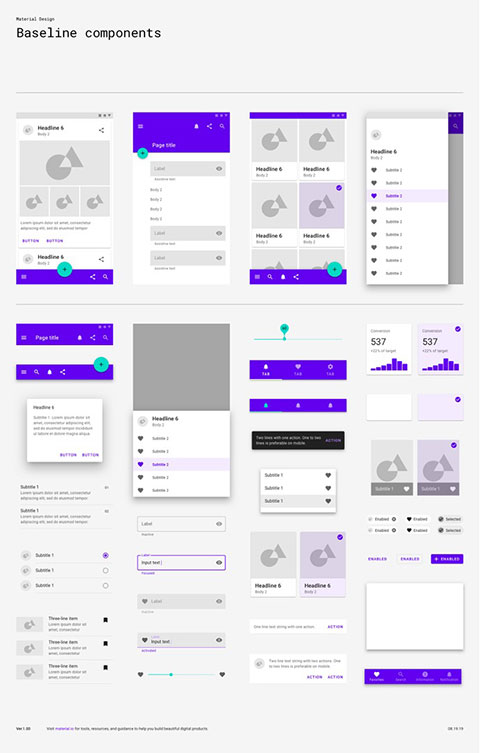 So, if a visual design trend comes along in 2023, don’t get blind-sided by its WOW! factor and jump head first into it. Validate it against the form vs function heuristic. When in doubt, choose the timeless over the trendy. At the end of the day, exceptional UX is not about pretty pictures, it’s about delivering outcomes.

2. Above the fold, don’t prioritize clutter over clarity

When it comes to digital real estate, above the fold screen space is the most precious across mobile or desktop footprints.

Why? Because users tend to make sweeping judgements about an experience in the first few milliseconds and this is largely based on what they see on the first fold. To add to that, users are getting increasingly impatient and attention spans are getting shorter. If users don’t “get it” immediately, you risk losing them forever.

The scarcity of pixels above the fold leads to two kinds of design approaches:

• More is more: This approach advocates showing the entire suite of products, services, and actions right up front and cramming as much as one possibly can above the fold. This approach assumes that users don’t scroll/click/tap (or don’t like to) and increasing discoverability is a function of how much you can showcase right upfront especially on the home page. This type of thinking typically leads to very dense, cluttered, and complex interfaces. The amount of information tends to overwhelm users and ends up reducing discoverability rather than promoting it.

• Less is more: This approach leverages the ‘progressive disclosure’ principle to prioritize only the most important and frequent information upfront while allowing users to get to everything else easily. The goal here is to minimize cognitive load and create a strong enough hook above the fold to motivate users to explore the rest. The best digital experiences across domains leverage this approach to make simplicity a strategic business advantage.

So, as you get ready to ring in 2023 remember that the key to good design lies in striking the right balance between the perception of complexity (clutter) and the interaction cost (clicks). Leaning too far towards either side leads to UX issues. In most cases, choosing the middle path is the surest path to UX nirvana.

Is amazon a super app? Is being ‘super’ a function of how large an online store’s inventory is? Is being super about bringing otherwise unrelated things under one roof? Like being able to buy a coffee and a flight ticket from the same place? (Think Tata Neu). By definition, super apps need to have multiple offerings in different sectors to be considered ‘super’.

The benefits of a super store are obvious in the physical world. Availability of everything under one roof reduces the pain of having to visit multiple stores, weave through traffic and go through checkout queues multiple times. Ultimately it saves enormous amounts of effort & time. The benefits for a business are obvious too…they can upsell & cross-sell more effectively, increase average order value and lead to a more habit-forming experience. Decathlon is a great example. Everything related to sports is under one roof. I don’t have to go 2 different places to buy camping gear and a tennis racket. 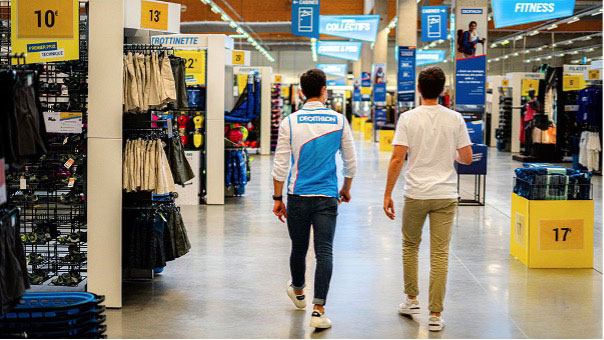 What are the benefits of an online super store? A food ordering app and a flight booking app are only a tap away from each other on your phone. For all practical purposes, the OG super app is your mobile phone’s OS. It brings everything you need under one roof and allows you to organize it the way you want. Its super yet it’s simple. There is no pain involved in moving from one app to another except of course in the rare use case when someone is trying to order a coffee and book a flight ticket at the same time. (Why in the world would you do that together?) So, considering my phone is already a super app of sorts what are the user benefits for an app that tries to mash up multiple apps into a one-stop-shop? The negatives such as clutter, information overload, complexity, etc. far outweigh the positives.

The TATA group launched the Neu super app with much fanfare only to realize very quickly that brick & mortar retail strategies can’t be copy pasted in the online context. Just putting many unrelated things under one roof doesn’t mean users will convert! In Tata Neu’s case, the perceived value of neu coins was not enough to compensate for the pain of an overwhelming and complex super app experience. 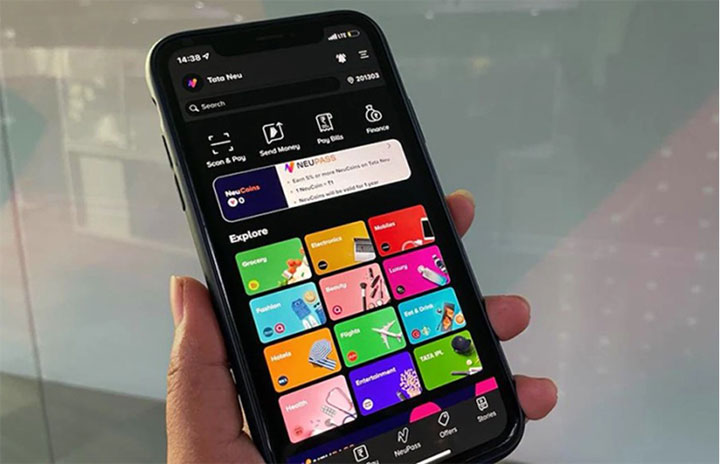 What about PayTM & PhonePe? Aren’t they living proof that there is indeed a pot of gold at the end of the super app rainbow? Super apps such as PayTM, PhonePe, Grab etc. started with one core offering and gradually grew into super apps. They did not attempt to be ‘super’ from day one. Amazon also evolved in the same way. Started with books and then gradually evolved to offering everything. The truth is, being super is very very difficult. Just throwing unrelated things together and putting a wrapper around it doesn’t make an app super. Even the almighty WhatsApp is struggling to get traction on UPI payments.

Despite the ever-increasing list of struggling super apps, there is no shortage of businesses that are planning to hop on to the super app bandwagon. My new year advice to all those businesses is, don’t chase the super app syndrome in 2023 unless you are ready to play the long game. The road to being super is a slow gradual process and cannot be artificially accelerated. Succeeding at super apps is a marathon, not a sprint.

Make 2023 a year of UX-centered growth

Go ahead and add these three to your list of new year UX resolutions. Always choose…
1. Function over Form
2. Clarity over Clutter
3. Simple over Super

Remember, the key to unleashing the true power of your digital platforms is to stop chasing transitory trends and put your faith in core UX fundamentals. Happy new year!